The MD200 is perfectly suited for locating covered ferromagnetic metals – for example valve caps and rods, hydrants, metallic manhole and tank covers, as well as marker nails or magnets which have been covered by soil, road surface, snow or water.

With this easily held magnetometer of the MultiMeasure Professional series, after just a short familiarisation period, you will already be able to locate covered objects quickly and without tiring, without the need for complex measuring and excavation.

Benefit from the robust workmanship, the ergonomic design, the high level of measurement accuracy and the many sophisticated functional details of this magnetometer from the MultiMeasure Professional series.

The MD200 is ready to go just a few seconds after being switched on. Thanks to the resistant ABS construction, a dirt and water-resistant membrane keypad as well as the waterproof probe rod made out of lightweight, epoxy-coated aluminium, you can even use this measuring device under harshest conditions.

Blazing heat, bitter cold, under water or in the snow – the MD200 was especially designed for these environments and provides high-precision location results in each situation.

The MD200 can safely locate ferromagnetic objects to a depth of three metres and indicate the proximity on the easily read, backlit display as a number and a bar graph. In addition, a beep which gets louder as the signal strength increases is emitted from the built in speaker.

Locating objects through magnetic field measurements with the MD200

The MD200 is perfectly suited for measuring changes in magnetic fields due to its two excitation coils and four receiver coils. The measuring device reacts with high sensitivity to the smallest changes of the terrestrial magnetic field, as it is influenced by ferromagnetic objects under the ground.

As you approach such an object with the MD200, the device indicates the increased signal both visually and acoustically.

For larger objects – for example manhole covers – the maximum values are generated at the object edges. By swinging the magnetometer and comparing the signal, the exact location can thus be determined. 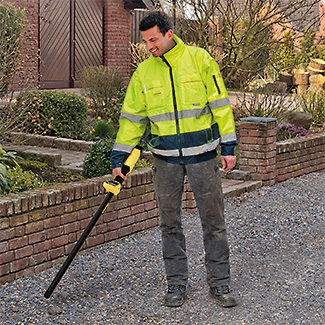 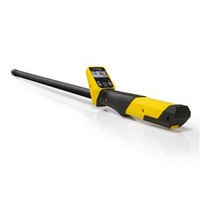 The MD200 is perfectly suited for locating covered '''''ferromagnetic''''' metals – for example valve caps and rods, hydrants, metallic manhole and tank covers, as well as marker nails or magnets which have been covered by soil, road surface, snow or water.